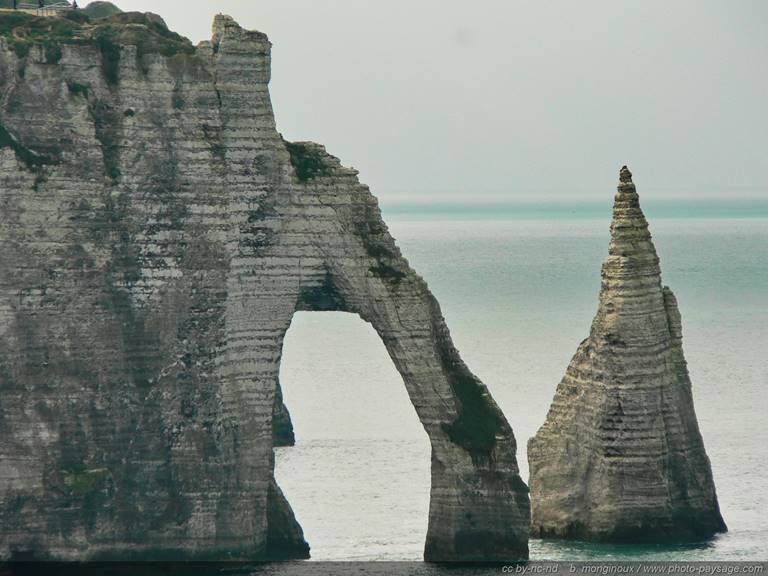 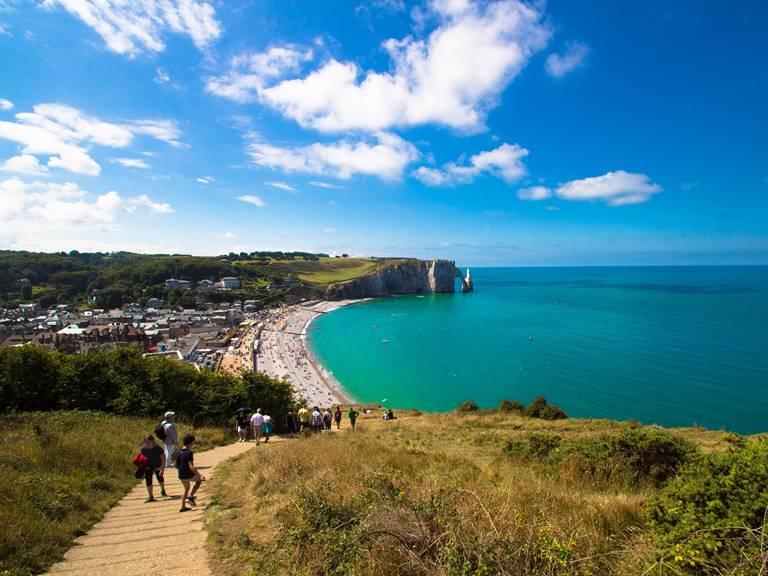 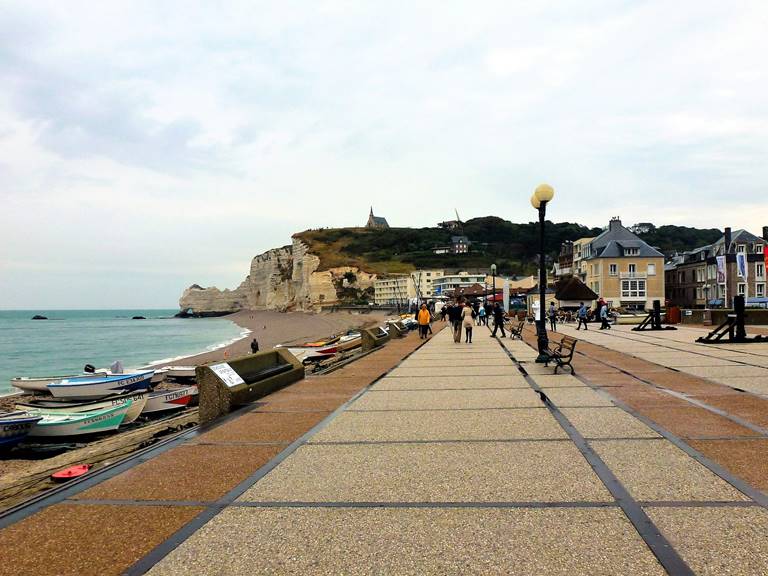 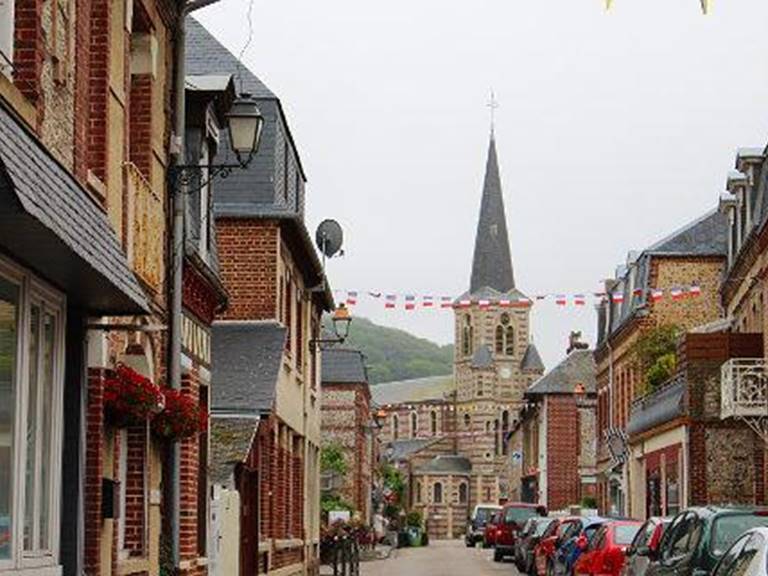 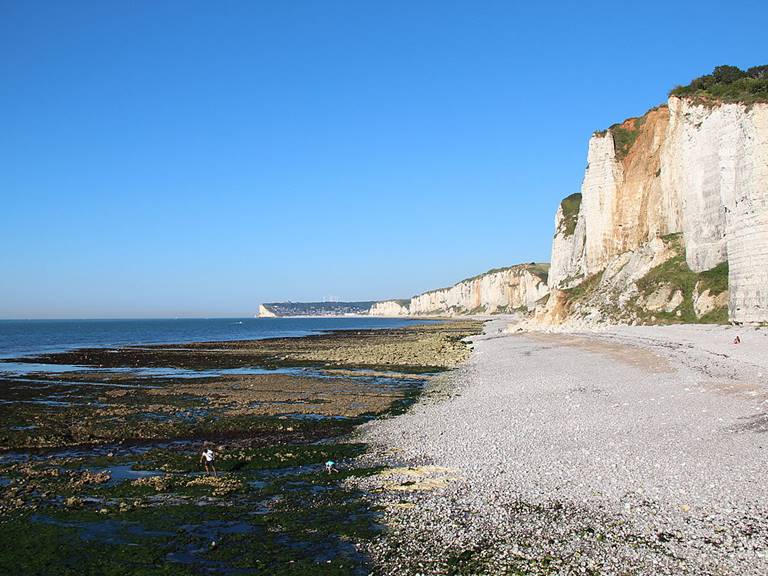 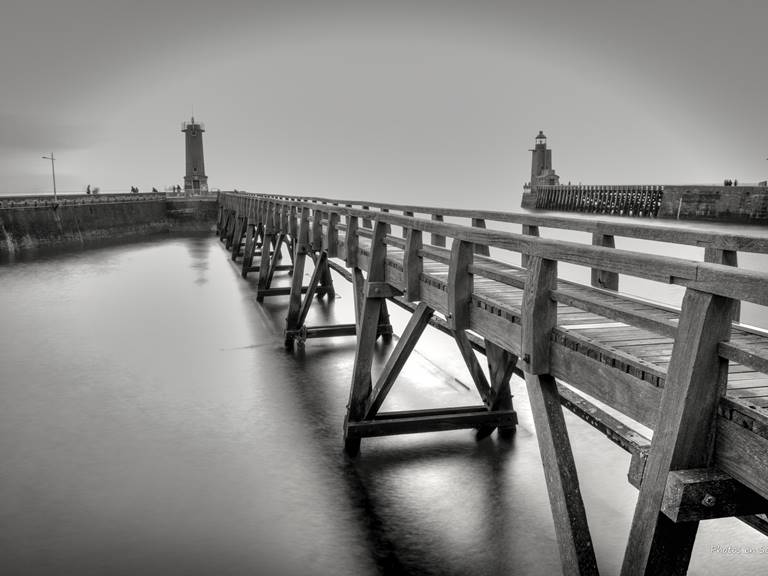 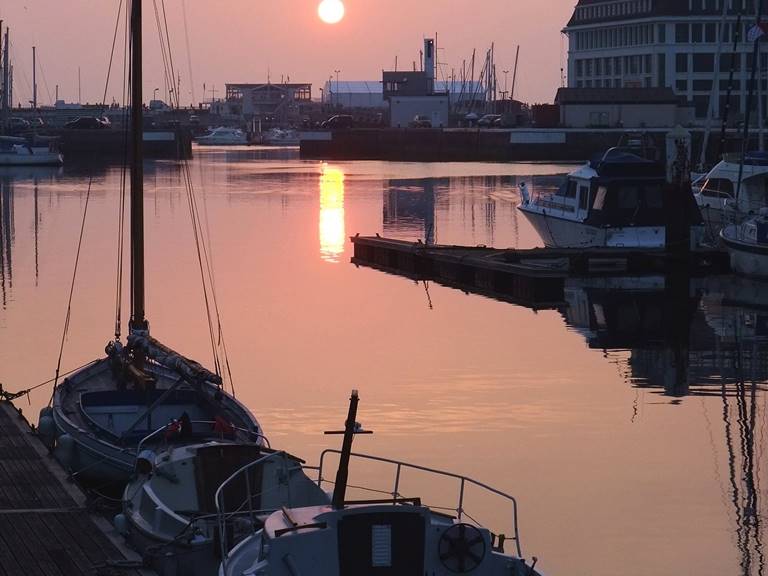 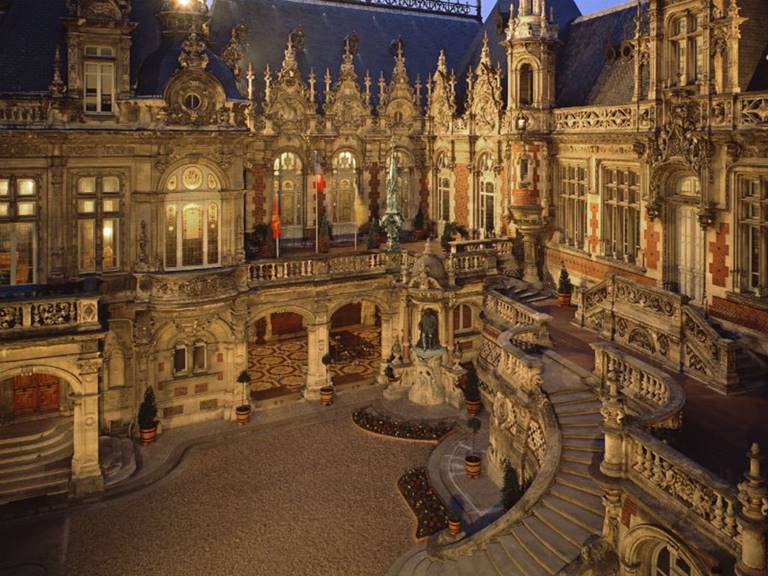 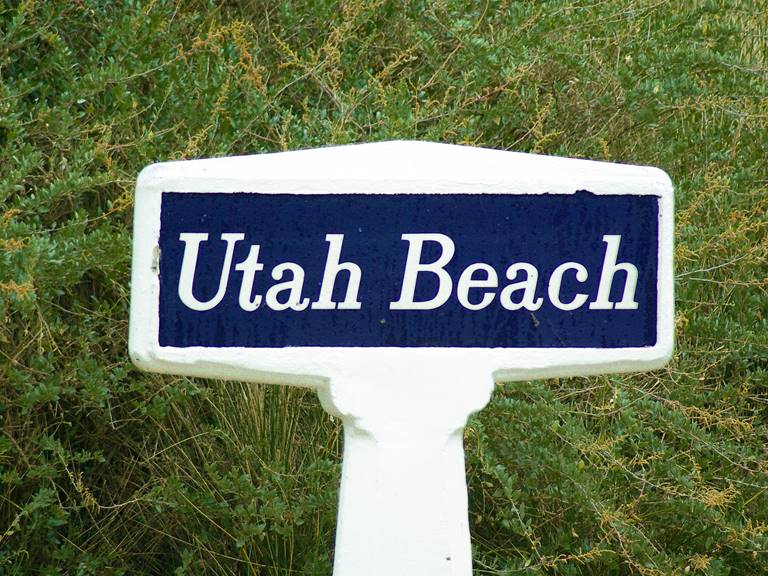 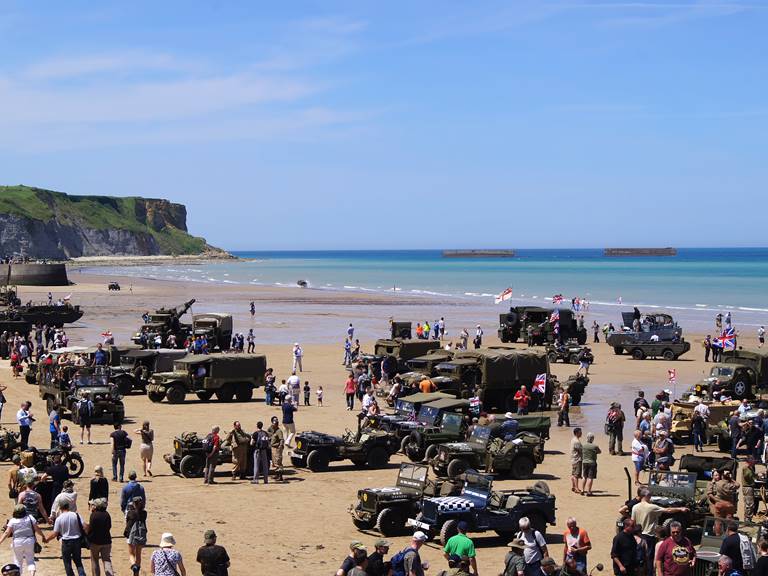 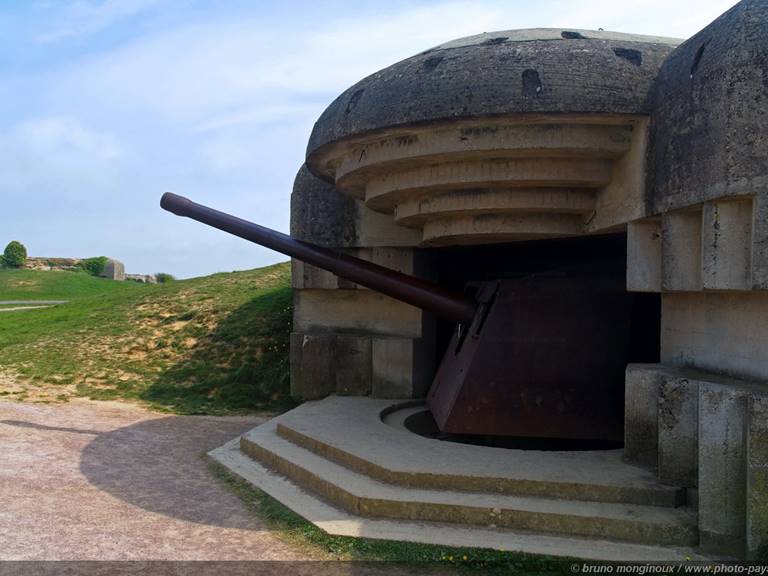 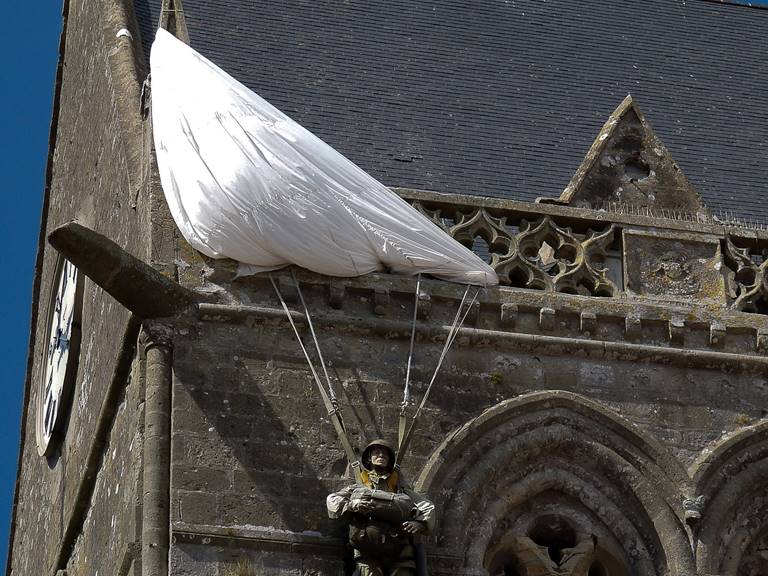 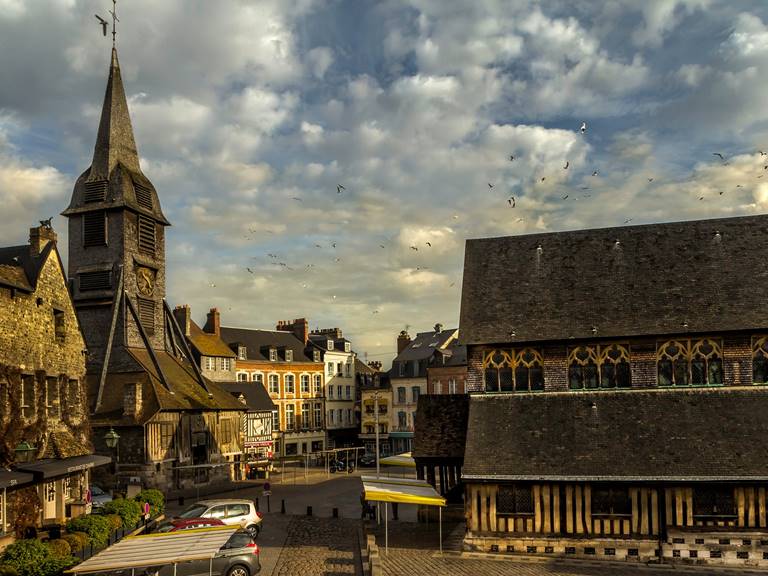 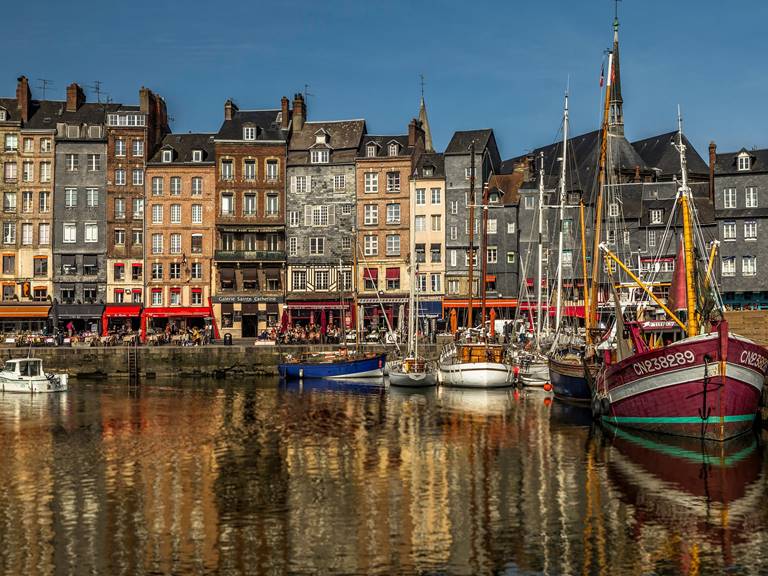 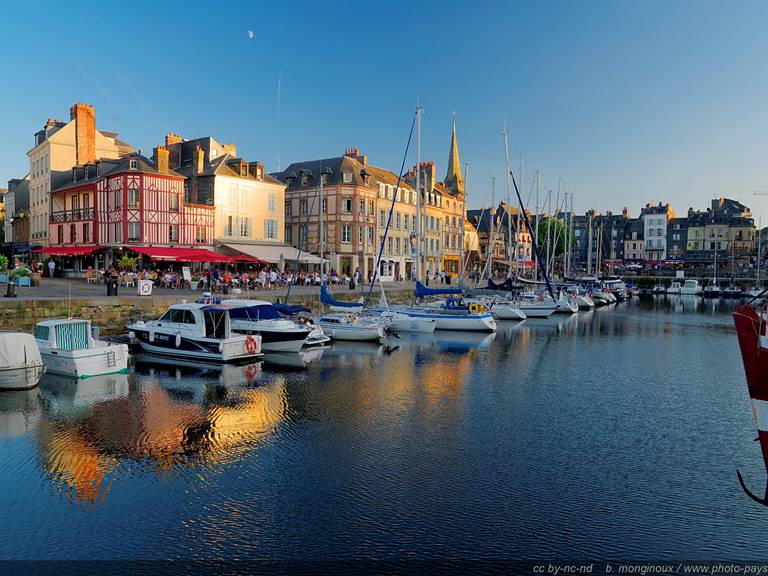 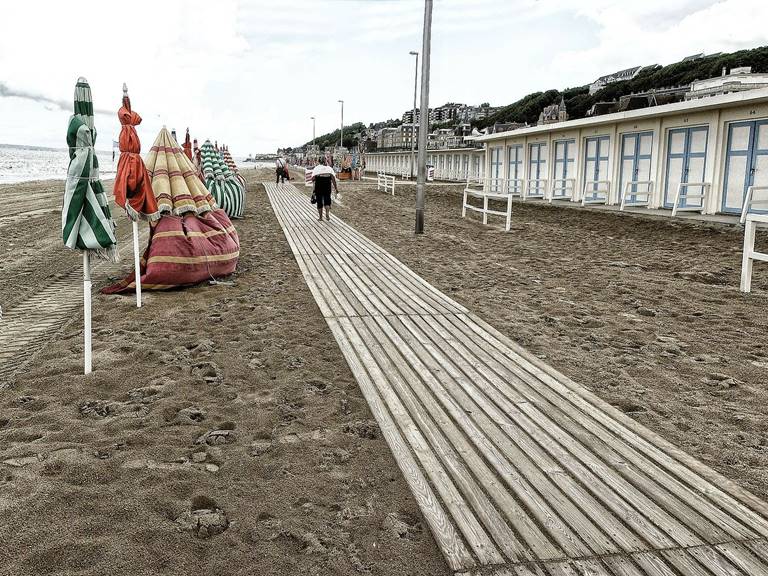 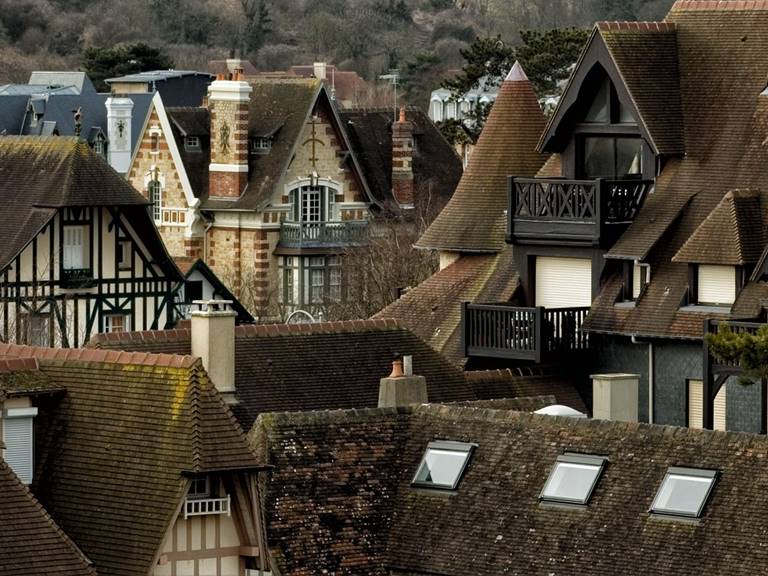 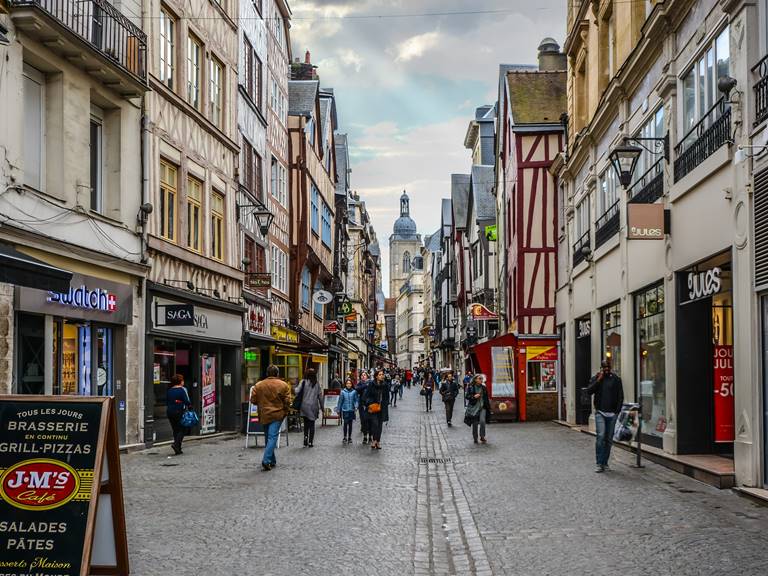 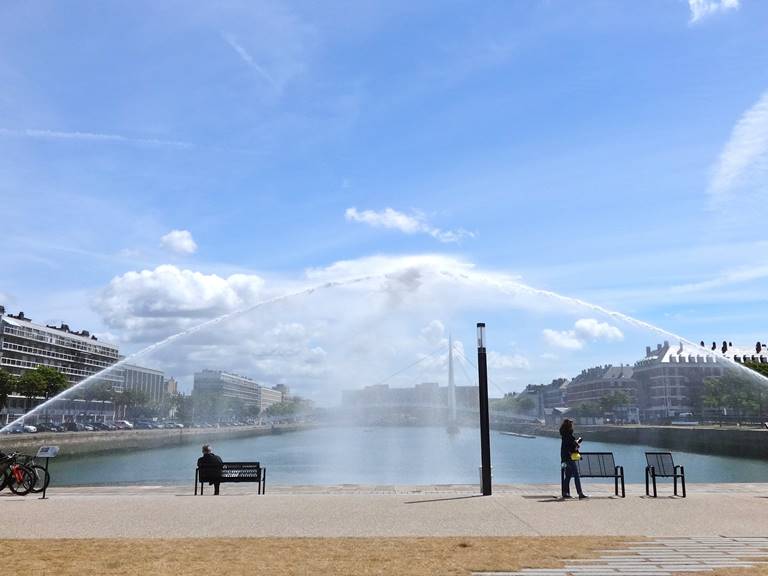 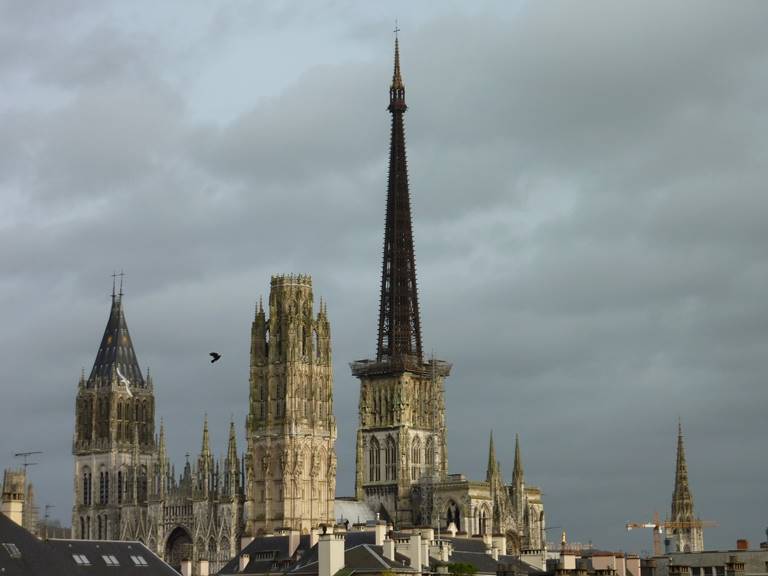 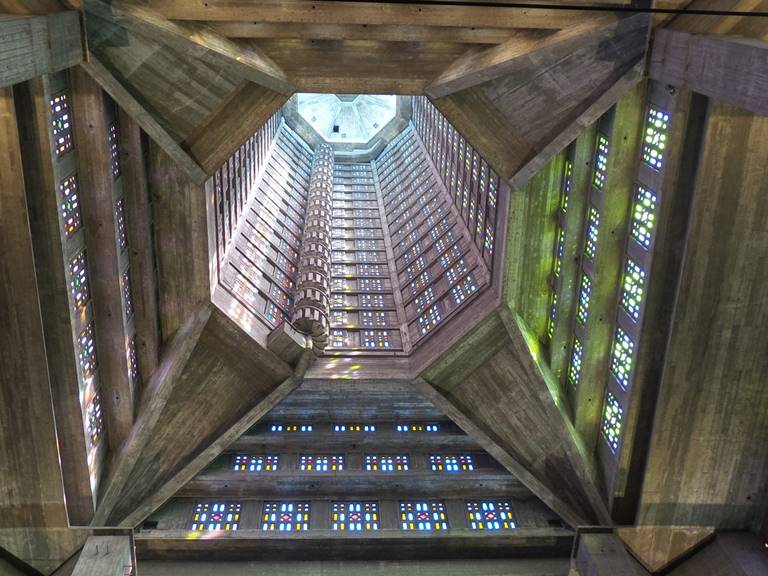 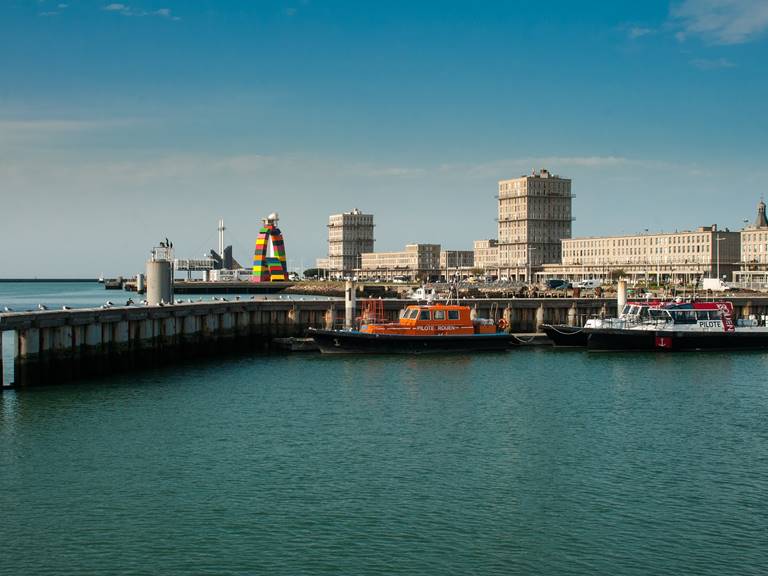 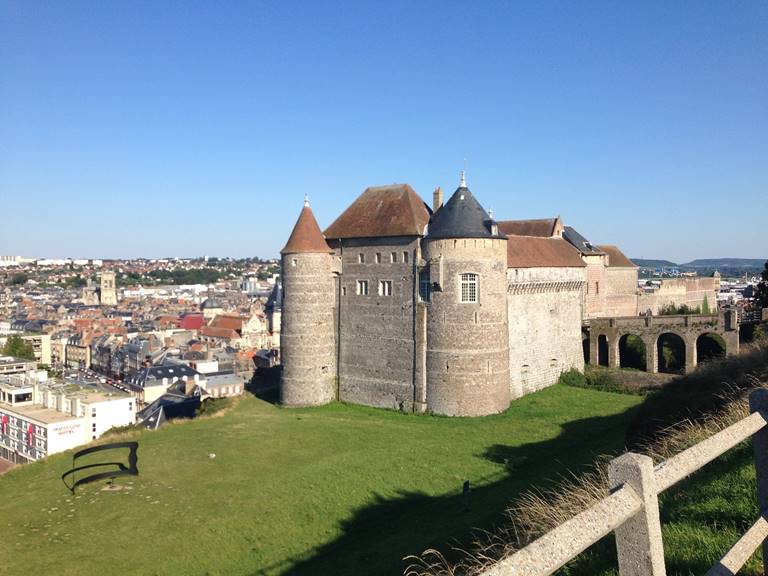 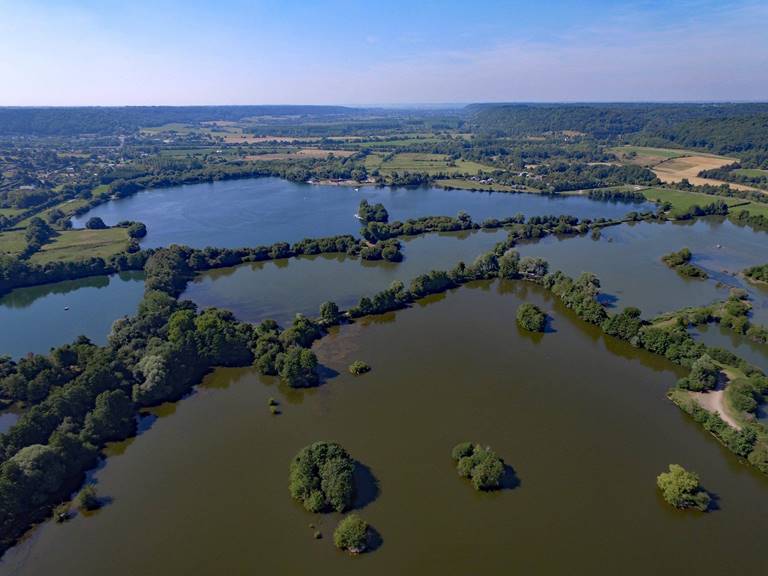 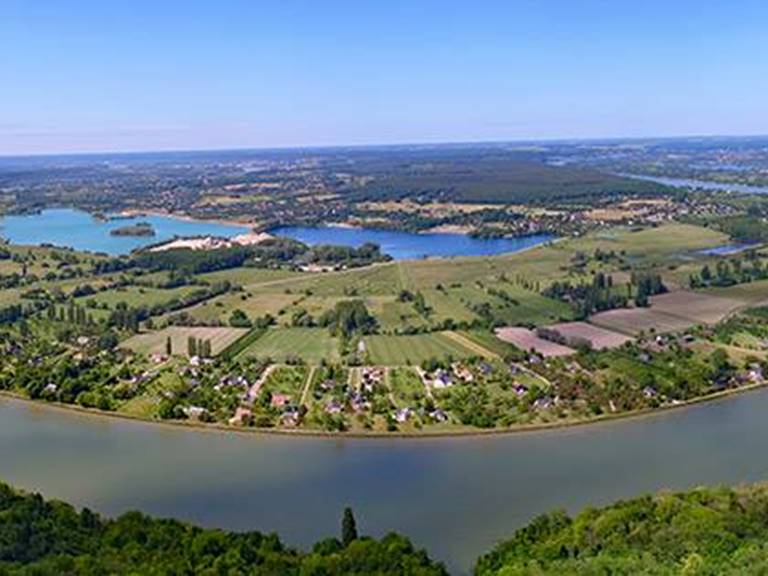 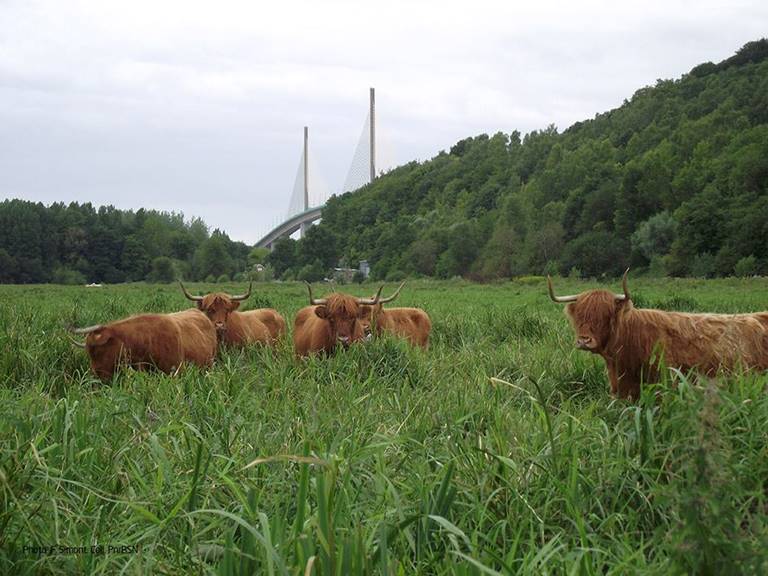 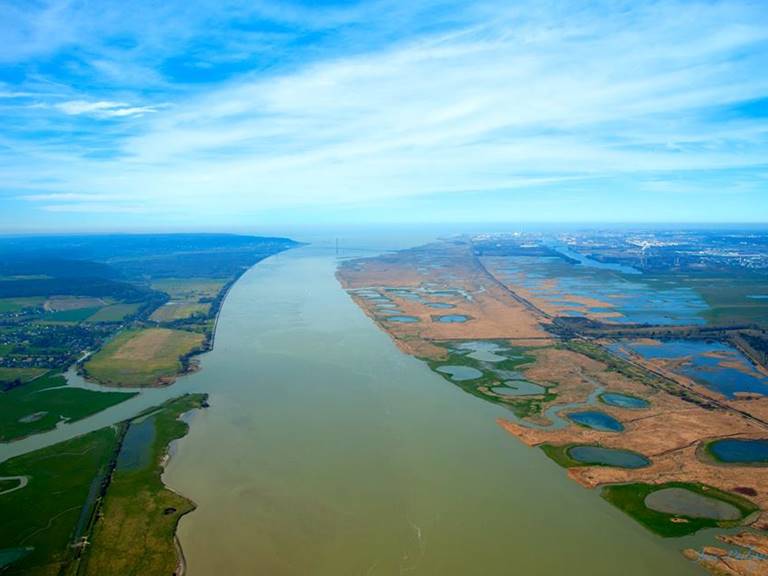 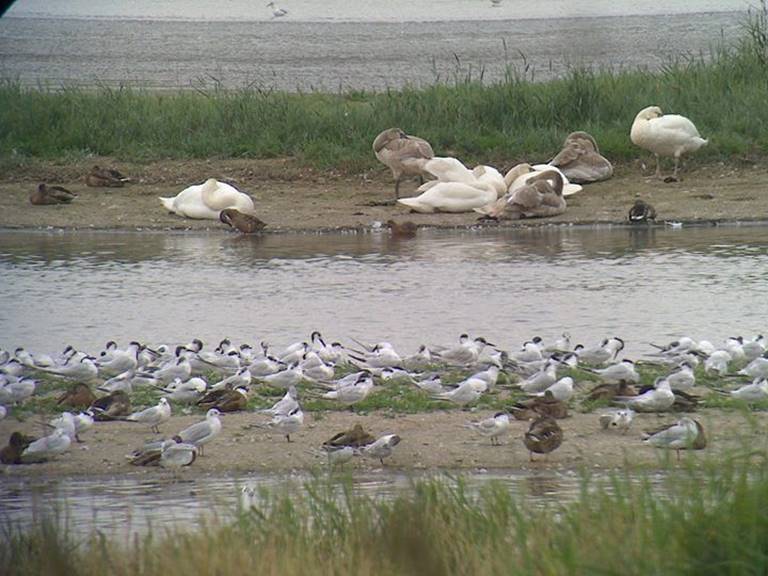 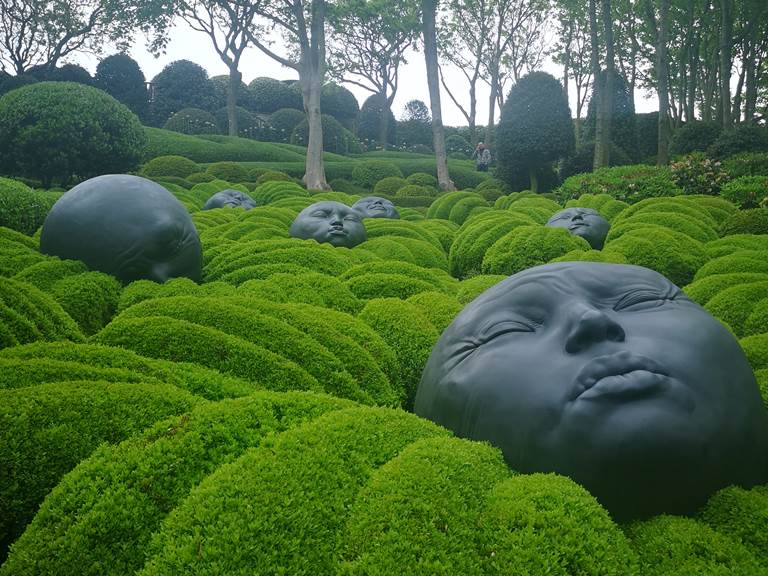 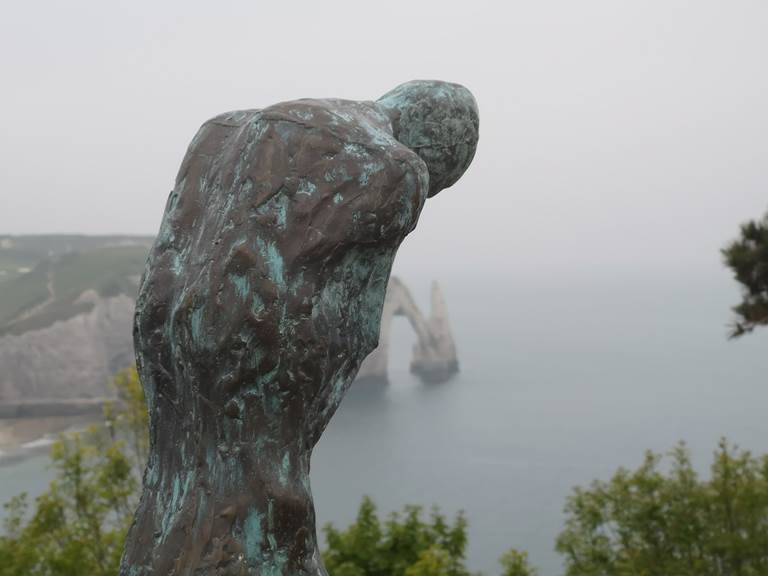 Normandy is very rich in terms of culture, gastronomy, landscapes and history, here is a list far from exhaustive places near us that we love and that we advise you to visit.

Romantic theater open on the Channel, Étretat inspired the most famous artists. A few moments on the spot are enough to understand why ... The singular shape of its cliffs, be it the Manneporte, the Courtine or the Aiguille, invite to the imagination.
If the time when women came to wash clothes on the beach is well and truly past, Étretat is still a strong site, where the man is in direct contact with nature. The stunning verticality of the cliffs of the Côte d'Albâ € ™ Contrast without false notes with the gentle roundness of the strike. Will you be tempted by a stroll at sea or will you prefer to discover the cliffs by the paths that overhang the Channel?Whether you are on your little ship or at the top of these majesty of limestone, you will be able to marvel at the splendor of a landscape unique in the world. And if treasure of the Kings of France there was in this mysterious setting, be sure that Arsene Lupine will have made good use of it! Here, the legends do not all need to be written, they live of themselves in this case whose fame millennium did not begin the wild beauty.

There are places that mark the spirits, Yport is one of them! "As light draws butterflies, Normandy calls artists, the brilliance of its fields, the variety of its sites and especially the wild beauty of its shore make it one of the richest corners of France in artistic documents. from this particularly privileged point of view ... "wrote Guy de Lourcade in the" Journal de Fécamp "dated September 5, 1909.
Even today, Yport, this small fishing village, now a seaside town, is one of the places on the Alabaster Coast where painters, writers, photographers, sculptors and musicians like to put their bags.
The light that strikes the high chalk cliffs inspires the artists of the easel. But Yport, it is also a long history of fishing at sea, at the time of the caiques, leaving several days to catch the herring and other treats of the sea.

Located on the Alabaster Coast, Fécamp seduces with its authentic side, its natural charm. The abbey church of the Holy Trinity, the Palace of the Dukes of Normandy and the rich collections of the museums of Newfoundland are among the must-see places to visit. Attracted by the scent of the plants and spices that make up the famous liqueur, do not miss the impressive Benedictine Palace, the Mecca of industrial tourism. A few kilometers from Fécamp, make a detour to Yport, a small fishing village located in a valley.Classified beach resort since 1929, Yport has welcomed many famous men such as Dieterle, Maupassant, Gide, Laurens or Boudin. The seaside architecture of this era is still present today in Fécamp, Yport and Vattetot-sur-Mer. In eclectic style, it combines Art Nouveau with neo-Norman and is characterized by large volumes and large windows.

the landing beaches (1 hour away)

More than 60 years after D-Day, the Normandy coast is peaceful with its beautiful seaside resorts and picturesque beaches. But memories of war and D-Day are embedded in the landscape. The coast is still strewn with old German cannons as well as many bunkers, while the war memorials are present in almost every village, at every turn of the road ... The region was cruelly marked by the war .
'' The landing beaches '' encompass a region stretching along the coastline of Calvados to the Manche department.There are many ways to compose your circiut, condensed in 1 day, a weekend, and more for enthusiasts. The itinerary must include the Caen Memorial, an essential element of the visit: this institution offers tourist days, even complete stays, around the themes of the landing and the Second World War.

The whole story of the landing through different stages:
→ A good starting point will be either the Caen Memorial or the Arromanches Landing Museum.
→ The beaches of Omaha Beach with the American cemetery
→ Utah Beach and the Landing Museum
→ Gold BeachJuno Beach and its center
→ The Pointe du Hoc
To this are added some communes marked by these events:
→ The village of Sainte-Mer-Eglise
→ Saint-Côme-du-Mont and the Man's Corner Museum
→ The battery of Longues-sur-Mer
→ The German cemetery in La Cambe
An exciting and moving circuit, where you learn a lot about a whole story that will leave no one indifferent.

A jewel! A Mecca of tourism in Normandy. You will be charmed in turn by the city of painters with its picturesque streets and its Old Bassin lined with restaurants.
Honfleur invites you to discover its picturesque streets and its narrow houses covered with slates. Spared by the trials of time, Honfleur has preserved the witnesses of this rich historical past which make it today one of the most visited cities of France. An international renown that it owes, in part, to the authenticity and charm of its cobbled streets, its half-timbered facades, its small shops, its charming hotels and its typical restaurants, but also to the diversity of its monuments and the richness of its cultural and artistic heritage. The Vieux Bassin and Lieutenance are the symbols of Honfleur.

Deauville is an international reference, a rendezvous for big screen stars and hardcore turf fans. Its boards, its multicolored parasols, its luxury hotels and its casino participate in the legend.
The city of elegant leisure and good taste knows how to receive, and everyone finds his happiness. A must-visit for boaters, the internationally renowned seaside resort knows how to charm its visitors with class, between its hotels, its casino and the pleasures of the sea baths. The 653 meters of planks of its promenade offer an astonishing spectacle: in front of a canvas of Impressionist background where the sun's rays play with clouds and reflections of water, stretches a field of multicolored parasols. Deckchairs and beach cabins are the essential accessories to admire this painting that takes a new dimension when it comes time for the American film festival. With the rich programming of the International Center, the small city can boast of being a leading cultural center.
The image of Deauville is of course also that of the equestrian world, races and stud farms that attract both enthusiasts and laypersons.

Rouen is the city with a hundred steeples built along the meanders of the Seine. His heritage is important and his story is as rich as it is exciting.A city and a life to discover during a walk in the gardens and parks, during a visit to the museums of Rouen or the rhythm of events.
Through the centuries here and there flowers of sacred architecture flourished. Notre-Dame Cathedral inspired Monet with his series of Cathedrals. Located in a beautiful environment, Saint-Maclou Church is also worth a visit. The banks of the Seine, developed, are also a place of privileged walk. This long walk will have opened your appetite. An enticing idea as Rouen is also famous for its good food. For their part, shoppers will not be outdone and will find in Rouen a favorite territory. You will find your happiness in the many shops and stalls that line the pedestrian streets. Rouen is a student city with a developed nightlife.

In the 19th century, Le Havre became a large industrial city integrating a port dedicated to the traffic of raw materials (cotton, coffee, spices, exotic woods ...) and passenger transport, with the growth of transatlantic ships. The result of a deep-rooted maritime and port history, Le Havre's heritage tells the story of an urban epic punctuated by great architects: Bellarmato, Thibault, Lamande, Perret, Niemeyer, Reichen & Robert, not forgetting Jean Nouvel.
The city center of Le Havre is the first reconstructed site (urban ensemble of the twentieth century) listed as a UNESCO World Heritage Site. Major architect of the twentieth century, a real "poet of concrete", visionary, Perret has managed to give a new face to a city ravaged by the Second World War. He reinvents a unique city with legible and airy architecture. The architecture gives pride of place to the light, the same light, so special, that inspired Claude Monet Impression, Soleil Levant, painted in Le Havre in 1872. A painting that will give its name to the Impressionist movement,

Dieppe's history and economy have always been closely tied to its fishing and trading port. His boats sailed all over the oceans.
200 years ago, Dieppe was the first seaside town in France. It has kept its beautiful promenade along the sea. City of Art and History, Dieppe is a vibrant and lively port city. On the weekends, the coffee terraces on the port are always full. Some shops are even open on Sundays. Every two years, the International Kite Festival gives a magical show. It is the largest gathering of its kind in Europe.

The Natural Park loops of the Seine (30 minutes)

In the Regional Natural Park of the Loops of the Norman Seine, everything revolves around the Seine and its loops which, from Rouen to its mouth between Honfleur and Le Havre, represent a 180km course with constantly renewed atmospheres and lights that inspired many impressionists like Sisley, Turner, Boudin ...

If the bridge of Brotonne, the bridge of Tancarville and the bridge of Normandy make it possible to pass from one bank to the other, the crossing of the Seine by borrowing one of the 6 bins has a unique character to go to the meeting of the natural wealths and heritage of the territory:
>Fruit Roads where cherries, red fruits, plums, apples, pears are sold in season at the fence;
> The Route des Chaumières, with its traditional habitat, stretches from the Maison du Parc to the vernier Marais, between the Seine and the forest;
> The landscapes that unfold from the many lookouts arranged for some of the orientation tables;
> 1,200 km of marked hiking trails between valleys, cliffs, hills, plateaus, forests and marshes.
> Wetlands that contain the park's most valuable natural heritage. To preserve and enhance them, the Park has set up Highlands Cattles or Camargue horses. It organizes visits and animations in the nature reserves and privileged sites to sensitize the public on the biodiversity and its environmental context.


The Natural Reserve of the Seine Estuary (30 minutes)
The estuary of the Seine is one of the three largest estuaries in France with the Loire and Gironde.A vast wetland of nearly 10 000 hectares, which shelters a set of typical and remarkable environments on a European scale - subtidal environments, mudflats, salt meadows, ponds, reedbeds, wet meadows - at the interface between land and sea.
The estuary of the Seine is composed of a great diversity of natural environments, subject to the influence of increasingly tides and salt: wet meadows, megaphorbia, ponds, reed beds, salt meadows, shorelines of sand and sand. pebbles, swaying estranszone from sandy-muddy to rocky tides and perpetually submerged areas. These highly productive habitats allow the expression of a flora of great wealth - nearly 500 species listed to date - and attract many animals including no less than 385 species of butterflies, 325 bird species, 70 species of fish, 48 species of mammals, 13 species of amphibians ...
Various economic and leisure activities are practiced in the nature reserve. Farmers and reed cutters contribute to the maintenance of wet meadows and some reed beds.The professional fishermen of Le Havre and Honfleur still practice fishing for shrimps and prawns. Finally hunting is allowed in the reserve on 30% of its surface. Most of this is a game of waterfowl hunted at night from gabions, semi-buried facilities next to pools maintained in reedbeds and meadows.